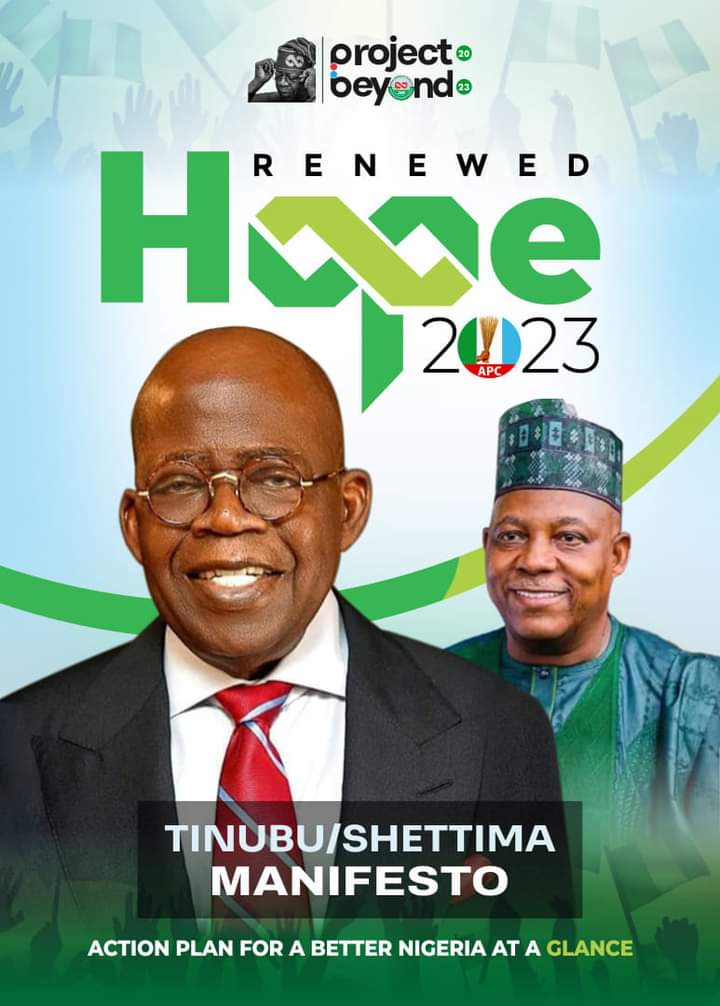 President Muhammadu Buhari and National Chairman of the All Progressives Congress, Senator Abdullahi Adamu, led Governors of the party, Ministers, National Working Committee members and other party leaders to Jos, Plateau State to flag off the presidential campaign rally of the party.

At the rally held on Tuesday at Jos Township Stadium, President Buhari assisted by Chairman Adamu handed over the party’s flag to Asíwájú Tinubu.

He reiterated his promise to lead the party’s campaign for the 2023 presidential election.

On arrival in Jos on Monday, Asíwájú Tinubu and his entourage had paid a courtesy call on Gbong Gwon Jos, Jacob Buba, who described both Tinubu and his running mate as tested people who have records of achievements, adding that what the country needs at this time are tested men.

While addressing the rally, both the National Chairman of the party and the Chairman, Progressives Governors’ Forum who is also the governor of Kebbi, Bagudu, commended President Buhari for his achievements, saying he would be leaving behind important legacies in democracy, good governance, infrastructure development and economic growth particularly in the area of agriculture and food security.

The Director-General of the Tinubu/Shettima Campaigns and governor of Plateau, Hon. Simon Lalong, said Tinubu who is described as City Boy of Lagos is now City Boy of the Plateau.

On his part President Buhari presented the party’s flag to Asiwaju Tinubu to formally present him to Nigerians as the symbol of the party in the coming presidential election.

In his speech that was later interpreted in Hausa language by his running mate, Kashim Shettima, Asiwaju Tinubu, praised Nigerians for believing in the APC to lead the country to progress after years of backwardness under the PDP administration by declaring “hope is back.”

He said the campaign was starting in Plateau, a place that properly shows Nigeria’s vast potentials.

“One can see greater prosperity and jobs in an economy humming with activity. From the farmer in the rural area to the city boy in a bustling urban centre, each will have productive work to do and a decent home to return to.

“One can see a Nigeria where all who want to will be able to build a decent life from the fruits of their individual and collective endeavour.

The APC flagbearer took time to praise President Muhammadu Buhari for his presence at the flagoff and the great foundation he has laid for the nation, which his incoming administration plans to build on.

“I am deeply honoured for the presence of His Excellency, President Muhammadu Buhari. As campaign chairman, he promised to lead from the front. A man of his word, President Buhari has done what he said and more.

“Mr. President, you have provided exceptional service to the nation and party. Your contributions are both positive and enduring. When the history of this period is objectively written, it will smile upon you and treat you with utmost kindness,” he added.

He also praised Adamu for leading the APC and steadying the ship of the party since assuming office as national chairman.

On his plans for the country if elected president, Tinubu said unlike other parties who are either dwelling on a fruitless past or a tomorrow of fantasies, his administration hopes to chart the course of progress already stated by the Buhari administration.

“We hereby reaffirm our commitment to progressive good governance and to the fruits that such governance can bring to this nation.

“February 2023 is more than an election. It is a fight to define the soul of the nation and to determine our collective fate. Do we adhere to the ideals of broadly shared prosperity, competence, peace, justice and compassion toward all? Or do we toss these ideals away, lashing ourselves to the divisive politics of the past or to those whose rantings show they cannot distinguish between fact and fantasy.

“Instead, we forge the wiser path toward our approved destination — an even better Nigeria. This is what the election is truly about,” he added.

To ensure overall energy security and resource mobilization for the country, Tinubu promised to continue the ongoing exploration works in all frontier basins and especially speed up the development of the commercial oil find in Gombe/ Bauchi states.

Reeling out the succeses of the Buhari administration, Tinubu said there was massive development in the agricultural, infrastructure and power sectors in the last eight years of the APC government.

According to him, these foundations now require more builders to make it a massive structure, calling on all Nigerians to embark on the journey with him.

“Here, I thank president Buhari again because he has truly established a strong foundation for the things we are now to do.

“The Buhari administration achieved things in the agricultural, infrastructural, and power sector no other administration has done. Additionally, his government liberated hundreds of communities from terrorists and brought thousands of displaced persons back to their homes.

“Truly the foundation has been set. It is now time to call more builders forward to further construct the national edifice that will be our best home. We, the APC and the Tinubu/Shettima team, seek to make permanent a covenant of progressive good governance with the people,” he said.

He added, “Under this hopeful pact, we will assemble the best team.

“We shall build on progress in the agricultural sector by establishing commodity boards guaranteeing minimal prices for strategic crops.

“We shall create agricultural and industrial hubs in all zones.

“You shall also see water catchment and irrigation systems to help farming while mitigating the dire effects of drought and flooding brought about by a changing climate.

“We will encourage urban employment through a national industrial plan that employs a series of measures including tax and employment credits.

“We will deepen the knowledge economy. Millions of the tech savvy, innovative youth will benefit as will our overall economy. talented youth will find a place in our government.

“We will bring greater power through natural gas and reasonable reform of the entire power sector.

“Our government will continue the infrastructural expansion so the overall economy may continue to expand in lockstep.

“Most importantly, I will give utmost priority to extinguishing terrorists and violent criminals. We shall augment our military, police and security personnel while providing them with better tactical communication and mobility. We will employhi-tech aerial surveillance to track and attack these menaces.

“These evil forces seek to destroy our democratic way of life. I have news for them. We will defeat their destructive way of life. They shall be utterly defeated and vanquished from our soil.”