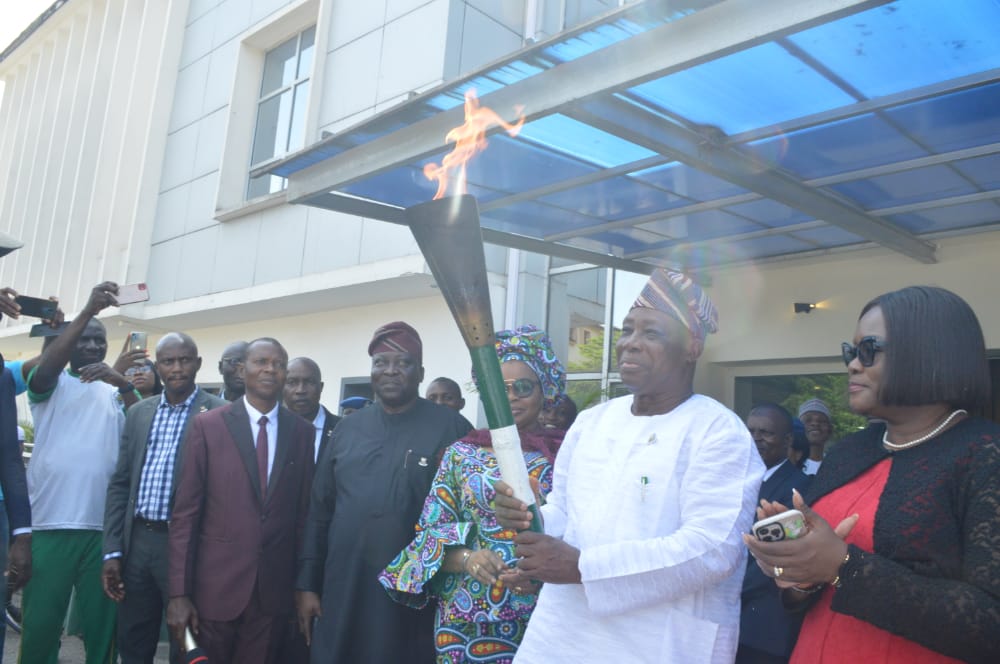 The Oyo state Deputy Governor, Barrister ‘Bayo Lawal, who represented the Executive Governor of Oyo state, Engineer Seyi Makinde, made this disclosure on Monday during the official presentation of the festival’s torch of unity at the office of the Governor.

Barrister Lawal said “Oyo State will not leave any stone unturned in ensuring active participation of the athletes in the forthcoming National Sports Festival holding in Asaba, Delta state.

Addressing the stakeholders, the Deputy Governor remarked the ongoing remodeling of the Lekan Salami Sports Complex, Adamasingba Ibadan and other five Sports facilities across all the geo-political zones of the State is a testimony to the fact that the State Government prioritizes sports, adding that the upgrading of the Lekan Salami stadium with the inclusion of the state of arts facilities make it expedient for an international competition to take place there in recent time”

“The Under 23 Africa Cup of Nations qualifier between Nigeria and Tanzania held on the 29th October, 2022 was approved by the Confederation of African Football (CAF) because of the upgrade of the facilities in Lekan Salami Stadium by the Oyo State Government”.

The Deputy Governor charged all the athletes representing Oyo state at the 21st National Sports Festival to redouble their efforts to emerge victorious by winning more laurels for the state stressing that the State Government is looking forward to seeing our athletes make the state proud by winning Gold medals in the forthcoming tournament.

The Deputy Governor passed the torch of Unity to the South West Zonal Coordinator of the Federal Ministry of Sports and Youth Development Mr Emmanuel Okere for onward movement to the State of Osun.

Earlier, the Oyo State Commissioner for Youths and Sports, Asiwaju Seun Fakorede, who received the torch of the Unity from the General Manager of the Oyo State Sports Council, remarked that the Torch of Unity ceremony is to herald the commencement of the National Sports Festival, adding that it is designed to go round the 36 states of the Federation. The Commissioner, who was optimistic about the victory of the athletes in Oyo state, said that ” Oyo team have prepared adequately to ensure that they perform excellently well in the Competitions”

Recall that the nation’s President Muhammadu Buhari flagged off the Torch of Unity Movement in Abuja to signify the commencement of the 21st National Sports Festival (NSF).

In attendance at Monday’s torch of unity ceremony in Ibadan were the Secretary to the State Government, Mrs Olubamiwo Adeosun, the Head of Service, Alhaja Ololade Agboola, the Deputy Chief of Staff, Honourable Ademola Ojo, the State Commissioner for Youth and Sports, Asiwaju Seun Fakorede, the General Manager of the Oyo State Sports Council, Mr Gboyega Makinde and other top government officials.