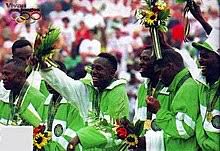 ..as Makinde others fulfilled pldege

Following the win on Saturday by the Nigeria Olympic football team, the Minister for Sports and Youth Development, Sunday Dare has called on the players not to rest on their oars until they make the nation’s proud.

Dare made this call in Ibadan after the Tanzania vs Nigeria March held at Lekan Salami stadium in Ibadan on Saturday.

Sports Minister Sunday Dare praised the team for a job well done, but charged them to develop the mentality to convert most of the opportunities they create during play.

“I congratulate you for a job well-done and I am happy that you have reached the final round of the qualifiers for the U23 AFCON. But I am challenging you to learn to convert most of your chances in open play. You only need to work hard and stay focused.”

Nigeria reached the final round of the 2023 Africa U23 Cup of Nations on Saturday after Timilehin Ogunniyi and Success Makanjuola scored in the second leg at the Lekan Salami Stadium, Ibadan to condemn visitors Tanzania to a two-goal defeat and 1-3 loss on aggregate.

The Olympic Eagles will play the winner of the fixture between Uganda and Guinea in the final round of the qualifiers in March 2023.