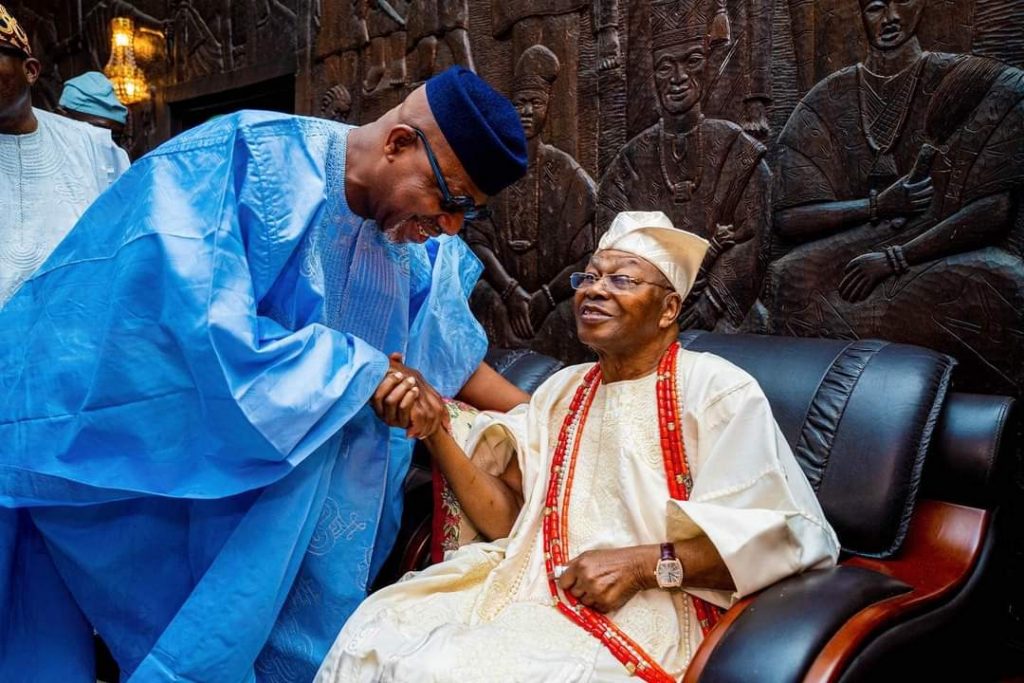 52 traditional rulers in the Ijebu Traditional Council, on Thursday, publicly announced their endorsement of the Ogun State governor, Dapo Abiodun, for another term of four years in office.

The Royal Fathers who converged on the Awujale’s Palace, Ijebu Ode, unanimously threw their weight behind the governor’s re-election bid, citing his sterling performance since he assumed office in 2019.

A statement by the governor’s Chief Press Secretary, Kunle Somorin said the traditional rulers conveyed their endorsement in a communique read by the Secretary of the Council, Obiri of Ayepe-Ijebu, Oba Rosiji Ogunbanjo, at the end of their monthly meeting presided over by the President of the council, the Awujale of Ijebuland, Oba Sikirulai Kayode Adetona.

The Awujale said he was proud of the governor’s giant strides and advised those eyeing the office of Governor to wait till 2027.

“Dapo Abiodun is simply the best for now. We do not intend to change him”, the royal father enthused as he prayed for the incumbent governor.

Reading the communique, Oba Ogunbanjo, said after reviewing happenings in Ijebuland and Ogun State under the leadership of Governor Abiodun, the Council unanimously endorsed him to continue in office beyond 2023.

The monarchs specifically commended the governor for signing into law, the Obas and Chiefs Laws of Ogun State 2021, which according to them has positively reformed installation and burial rights of traditional rulers in Ogun State.

The traditional rulers who noted that the governor has demonstrated inclusive governance that has brought down drastically, the political heat in the state, also lauded him for carrying out projects equitably in the various divisions of the state.

“The Ijebu Traditional Council noted the governor’s pledge on the development of the deep seaport in Ogun Waterside Local Government and we encourage him to see to the actualization of the project;

“The governor has attracted an unprecedented inflow of direct foreign investments to the state and making the state the preferred investment destination;

“The governor has increased the Internally Generated Revenue for the state to a record level that has made the state number three in Nigeria according to BudgIT Report 2021;

“The governor and his officials continue to accord regard and reverence to traditional rulers and institutions in Ogun State;

“Taking the sterling performance of the governor and his team into cognisance, members deliberated further on the future of the state. And therefore, the ljebu Traditional Council (ITC) unanimously endorsed the second term bid of Governor Dapo Abiodun as governor of Ogun state, for him to continue his good, people-oriented developmental projects and services in the state beyond 2023”, the traditional rulers submitted in the communiqué.

Earlier in his remarks, the Dagburewe of Idowa, Oba Yunusa Adekoya, declared that another four years of Abiodun’s leadership will turn Ogun to the utopia area.

Responding, Governor Abiodun thanked the monarchs for their support and declaration of their endorsement for his contuinuty in office.

Speaking at the event, Abiodun, who extolled the virtue of Adetona, said the monarch, is a father to him recalling some of good things he had benefitted personally, from the traditional ruler.

Abiodun, who highlighted some of the developmental and infrastructural projects executed by his administration in Ijebuland and the state in general, said the Agro Cargo Airport alone, had attracted multi-billion naira projects to the state.

According to him, the Airport project that he inherited from his predecessor, had earned the state a cheque of N3.5billion from the Nigeria Customs Service (NCS), for 100 hectares of land.

In addition, the governor said one of the partners of the state, had paid $400million dollars to invest in the Cargo Airport area.

Abiodun said for these investments, the state only contributed land.

The governor, who appreciated the people of the state for their support promised not to rest on his oars, as he continues in 2023.