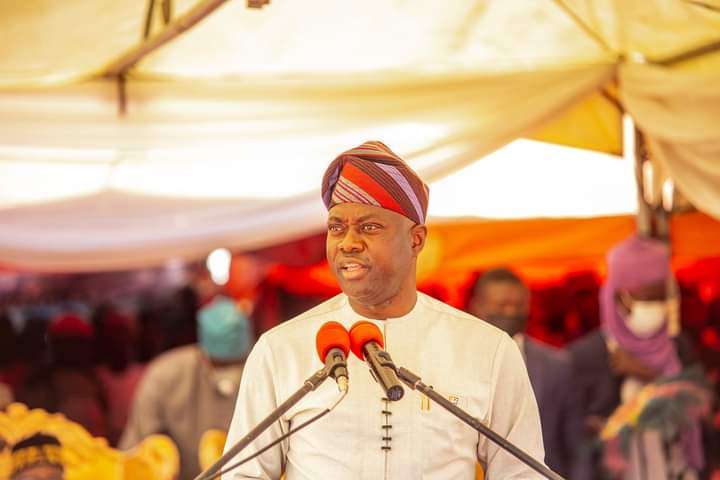 The All Progressives Congress APC in Oyo state has alleged that Governor Seyi Makinde has done enough damage to the key sectors of the economy, particularly education, that his administration should not be allowed to be in the saddle beyond May 29, 2023.

Oyo APC’s lamentation came against the backdrop of a video clip which went viral on the social media wherein a female teacher and her male colleague were chanting a PDP campaign song to pupils of a public primary school in the state. In the same video, the female teacher who adorned a fez cap customized for the reelection campaign of Gov. Makinde was caught telling the minors to master the vote-for-PDP song and relay it to their parents at home.

In a statement issued at the weekend and made available to journalists in Ibadan by its Publicity Secretary, Olawale Sadare, Oyo APC called on all stakeholders to rise up and condemn what it described as “height of impunity, insensitivity and lawlessness being displayed by the present administration and its agents across the state.

“The whole world was taken aback few days ago when the video clip in which the shameful act was perpetrated leaked to the public space. Initially, we found it extremely hard to believe what was contained in the video clip because we did know that things had gone bad to that level and this explains why our reaction came only when we had done proper investigation and established the veracity of the matter.

“The video revealed how few compromised teachers and public servants were being used to do politics in sharp contrast to the dictate of the law, ethics of their profession and social responsibility ethos. We have been made to see the major reason for the pitiable condition of education in the state as those expected to teach morals and impart knowledge have been handed the duty of dirty politicking using the innocent minors as tools.

“The Makinde administration which changed the normal school curriculum to open political campaigns at a time serious academic exercise should be taking place in schools would later demand good performance of pupils at internal and external examinations to give a false impression of progress and giant strides. As a result of this, handlers of this pupils would be left with no option than to encourage examination malpractices as this recently manifested in the delisting of 50 schools by WAEC across Oyo state.

“There have been reports of academic exercises being disrupted by some overzealous appointees and local government council officials in many places visited by Gov. Makinde as teachers and pupils would be forced to file up on the major roads and wave PDP flags at the convoy of the governor with a view to creating an impression that he (Makinde) was popular. In many instances, pupils would be made to stay under the scorching sun for hours even as they were exposed to the danger in the hands of PMS thugs who drive recklessly in the long convoy.

“While we assure the public that necessary steps would be taken to make a scapegoat of the erring teachers by the appropriate authorities, it is very essential for the leadership of the Nigerian Union of Teachers (NUT), Nigerian Labour Congress (NLC) and Trade Union Congress (TUC) to sensitize their members on the need to maintain professional standard at all times and also resist attempts by evil politicians to turn them into a tool of dirty politicking.” Sadare stated.