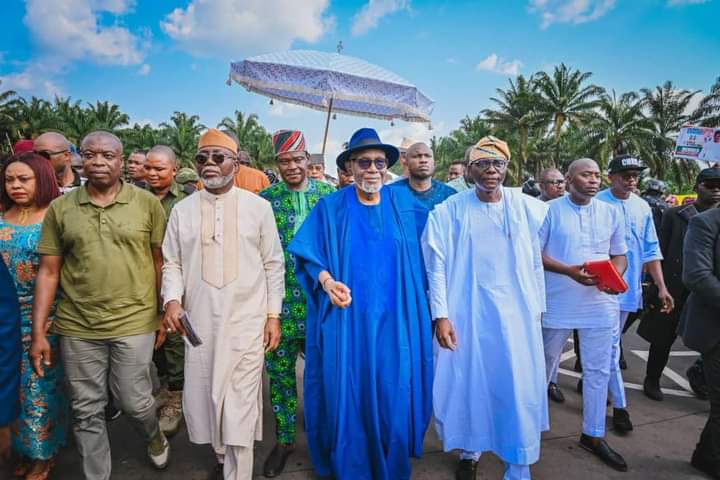 Governor Sanwo-Olu commissioned the road amidst pomps and pageantry at Erinje Junction in Okitipupa, Okitipupa Local Government Area of the state.

The Lagos State Governor commended Governor Akeredolu for the impactful and significant development happening in the Sunshine state.

Governor Sanwo-olu said: “What we are about, as a party, as brothers, is to continue to do what we call peer review and to continue to encourage one another.

“This is not my first time. It is not my second time of coming to Ondo State. And each time I come, it is because of a significant development that is happening in your state.

“You have seen that, indeed, there is meaningful development that is happening in your state. You can see that, even with the little resources available to the State, Arakunrin Akeredolu is using it well for the betterment of the people and the state. I want to thank you for this sir.

“Earlier today, I was in Owo. I can see new roads. We are here again. This is indeed a First Class road that is worthy to be acknowledged.

“Governor Akeredolu, thank you for holding onto our party. Thank you for giving your people the real essence of democracy. It is only with infrastructure you can see growth and development in all our communities.

“It is only with infrastructure we can commune peacefully from one community to another community, that you can move from one jurisdiction to another, effortlessly.

“Tell other communities that with Akeredolu, more purposeful and meaningful development is coming. It is just a case of let us just finish one before we move to another. You can see the quality of this road is next to none.

“You can see that is what governance is all about. It is not an abandoned project, it is not a failed project. Governance is about solution, it is about the people,” Governor Sanwo-Olu added.

Present at the commissioning were the deputy governor, Hon. Lucky Aiyedatiwa; members of the State Executive Council led by the Secretary to the State Government, Princess Oladunni Odu; state chairman of the APC, Engr. Ade Adetimehin; APC chieftains including candidates from the Central and Southern Senatorial Districts; religious leaders; traditional rulers and several other dignitaries.

Earlier, the Host and Ondo State Governor, Arakunrin Oluwarotimi Akeredolu, explained that the road was constructed on a virgin land to permanently solve the horrific problem of traffic congestion in Okitipupa.

Governor Akeredolu said the traffic congestions usually resulted in delay for vehicles plying Okitipupa–Igbokoda Road, and always making a journey which should normally last about 30 minutes to become hours.

He particularly appreciated Governor Babajide Sanwo-Olu for finding time out of his busy schedule to honour his invitation to commission the road.

Governor Akeredolu revealed that in infrastructure development and good governance, his administration has raised the bar and set a standard which can hardly be faulted by anyone.

He described his administration as the flagship and reference point for infrastructural development, transformation and good governance in Nigeria.

According to him, as a virgin land, the best contractor was used to construct the road project to standard and specification.

The Governor also appealed to the people to consider all the road projects as both their personal and collective heritage by protecting and preserving them.

He added that his government has achieved a lot in terms of development of infrastructure by emplacing a string of people-oriented projects that have benchmarked Ondo State as a State of repute in Nigeria in terms of quality and speed in project delivery.

“It would be recalled that when we came on board in 2017, we felt, and rightly so, that there is the compelling need to have a flyover bridge at Ore to take care of the apparently unceasing traffic on the road with its attendant carnage occasioned by incessant road accidents.

“We started and completed the Redemption Bridge within two years of the first term of our Administration, thus solving the problem of the carnage and traffic gridlock on the Sagamu–Ore–Benin Road.

“Again, we conceptualised and constructed into a dual carriageway, the ever busy and commercially-active ‘A’-Division–Oba Osupa (Hospital Road)–Oluwatuyi–Ijoka Road which successive administration since the creation of Ondo State were unable to attend to for lack of the political will because virtually all the road setbacks had been fully built by the people.

“These structures had to give way, including those that were formally acquired for demolition to allow for the modern road with attendant huge compensation. I am happy to inform you that the construction of these dual carriageways has attained an appreciable level of completion and it is our hope that it will be completed soonest.

“The construction into a dual carriageway, Phase I of Ikare Akoko township roads has been completed amongst several other completed township roads. This is in addition to over 40 road projects spanning over 350km across the State both inherited from previous administrations and initiated by our own administration,” the Governor added.

The Commissioner for Infrastructure, Lands and Housing, Engr Raimi Aminu, disclosed that the 10 kilometres road network started from Ikoya to Ilutitun to Igbokoda and with spur to Araromi-Lisa community with different features.

They all commended Governor Akeredolu for his unwavering infrastructural development across the state, saying the development has enhanced socio-economic activities in the affected areas.