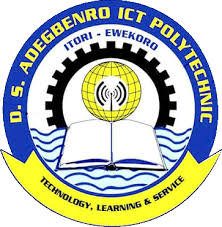 As an indigene of Ogun State, I know and believe from all indices and evidences that the Ogun State Governor, Prince Dapo Abiodun has done marvellously well and commited a huge resources to education sector with a plan to reposition Ogun State to her pride of place as the foremost educational state in Nigeria.

From the two state owned universities, to its many polytechnics, including the ICT polytechnics spread across the divisions of the state, particularly D.S Adegbenro ICT Polytechnic, Igbesa.

D.S. Adegbenro ICT Polytechnic is one of the state-owned polytechnic established in 2004 by the administration of Otunba Gbenga Daniel.

D.S. Adegbenro ICT Polytechnic, Itori-Ewekoro, Ifo, Ogun State has been officially accredited and recognized by the National Board for Technical Education (NBTE), Nigeria.

The school since its establishment has contributed immensely to the youth advancement not only on admission of students only but giving its product entrepreneural skills and vocations.

But recent events in D.S Adegbenro Polytechnic especially as it relates to appointment of a new rector is however sending a very wrong signal to observers.

Section 8:2 (1) states ‘The qualifications of the persons who may apply for the post, which shall be a Chief Lecturer in the Polytechnic sector with at least five years experience on that position among other criteria.

It is also important that would be ‘Rector’ whose qualifications are not in line with the NBTE standards and who are morally deficient to impart quality knowledge into students should not be seen being considered by the Chief Executive, the Governor who in most cases is the Visitor to the school.

For instance, feelers coming from the planned appointment of a new Rector for the Polytechnic shows that some of the aforementioned are about to be thrown out because of a first class ruler who has been exerting undue influence on the state government over the years to ensure that only individuals from his narrow domain in a particular senatorial district are appointed Rector of one of the polytechnics.

This development is already generating disaffection for the state government.

It should also be noted that appointing a non technologist may be greatly inimical to the growth and the essence of the institution.

The truth needs to be told here, as a first class Oba in a state, it is not a sin to influence appointment but that should not be extended to an academic appointment as only quality and qualified people must be considered for such.

Subverting the most qualified person for the Rectorship position would not augur well for the nation’s foremost polytechnic.

Applicant to be appointed a Rector must have a Doctorate and his academic qualifications, must be including B.sc/HND and must have been obtained in core disciplines viz: technology, applied sciences ,commerce and management.

By this, those in liberal Arts/General Studies department are technically excluded from the Rectorship race.

This is in line with NBTE requirements and the recent protest by ASUP that some state governments have been appointing unqualified persons as Rectors for political reasons. We hope such mistake will not feature in the selection process of new Rectors in Ogun State.

I’m aware that an interview for the appointment of a substantive Rector for the Polytechnic has been conducted and waiting for the approval of Gov Dapo Abiodun.

The requirement for the Rector of D.S. Adegbenro ICT Polytechnic, Itori stipulate the attainment of the post of a Chief Lecturer of not less than 5years which is the National Board for Technical Education (NBTE) standard.

It is important for the state government to also take into cognisance controversies that trailed requirements for the appointment of a Rector into ICT Polytechnics in Igbesa, Saapade and Ijebu-Igbo which was equally rejected by the Academic Staff Union of Polytechnics(ASUP) at her National Executive Council Meeting held at Jigawa State Polytechnic on the 7th of July, 2022; a day before the controversial advertisement for the position of Rectors for the ICT Polytechnics in Igbesa, Saapade and Ijebu-Igbo was done in the Vanguard newspaper.

Again, the questions of why did the most senior career officers and the political appointees in the Ministry of Education wait until a week (8/7/2022) to the expiration of the tenure of the immediate past Rectors of the ICT Polytechnics in Igbesa, Saapade and Ijebu-Igbo (15/7/2022) before they published the advertisement for the position of a new Rector.

These are not my real concern, the real issue here is that the state government must not subvert competence for mediocrity through appointing a non technologist which may portrayed the government and its officials as working for just one traditional ruler instead of working for the entire people of Ogun State.

Mr Governor sir, millions of Ogun State indigenes, at home and in the Diaspora look forward to you doing the right thing because of the future of our youths cannot to be toyed with, and that these greedy traditional rulers and gluttonous political appointees are a cancer that can consume your administration and give it a bad name.