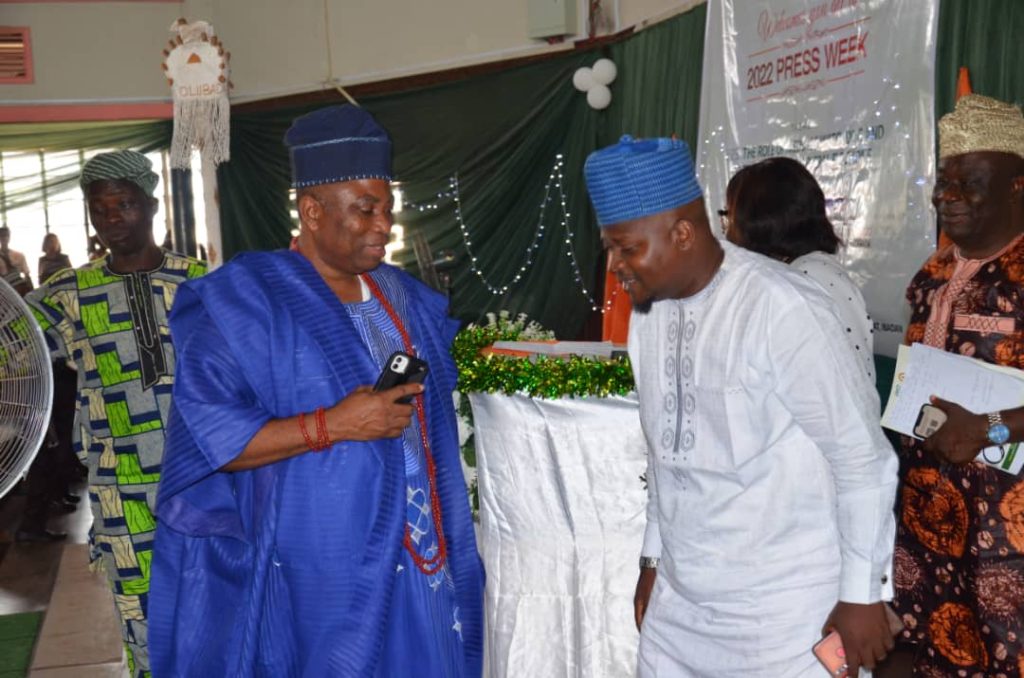 …presents Certificates of Recognition to past leaders.

The Award and Certificates of recognition were conferred to the honorees on Thursday at the NUJIC 2022 Press Week, which was held at the House of Chiefs, Secretariat, Agodi, Ibadan.
In his welcome remarks, the Chairman Nigeria Union of Journalists, Information Chapel, NUJIC,Comrade Ismail Fasasi said that all the honorees were carefully chosen, noting that they are the personalities that have distinguished themselves in their chosen career.

He explained that his administration will continue to prioritize the welfare of its members by providing regular training workshops and capacity building programmes.

He implored all members to continue to support his administration as their contributions would go a long way in repositioning NUJIC.

Fasasi called on the journalists to be more professional and refrain from fake news, unfounded news, defamatory news, scandalous news, urging them to always verify information before reporting and not to report issues that will cause violence before, during and after election.

“ When I and my executive members took over the mantle of leadership October, last year, we pledged that our administration will rest on four major programmes, which include restoration of the vibrancy, that has been the pride of our chapel; improved welfare packages for members; capacity building and training for members as well as promotion of collective responsibility, integrity and accountability.

“I am glad to inform our guests that all these promises have been kept since our first day in office.

Also, today’s event is a testimony to this. A training workshop has been organized and welfare packages have been provided for all members of this Union.”

Today’s event, which includes presentation of awards of excellence to some eminent personalities, is in recognition of the honorees’ immense contributions to our dear State and humanity in general.”

“Also, Certificates of recognition will be awarded to some of our past leaders at the Chapel that have contributed to the upliftment of our great Union.”

While speaking, the Vice chairman of the NUJ, Oyo state council, Comrade Seye Ojo, who represented the state chairman, Demola Babalola, appreciated the attendees, insisting that the new administration in the state will deliver more dividends to the community of journalists.

He added that within its first 100 days, the State NUJ Press Centre would have received its asphaltic tarring and solar power installation.

Delivering the keynote lecture titled: ‘The role of Media as Watchdog and gatekeeping in the general elections’ presented by deputy vice-chancellor, Ajayi Crowther University, Oyo Prof. Olumuyiwa Popoola ably represented by a senior lecturer, Department of Communications and Media, Dr Matthew Oni emphasized the functions journalists perform in the society.

He also highlighted the need to embrace truth in their coverage, especially as the 2023 general elections approach as never to strengthen confusion in the country.

In the remarks of the awardees, they dedicated the award to the Executive Governor of Oyo State for working tirelessly to make life comfortable for the citizens of Oyo state.

In his response, the commissioner for information Culture and Tourism,Dr Wasiu Olatunbosu,who was represented by Permanent Secretary,Mr Oyesola Oyedele,congratulated the NUJIC for the week, urging them to keep the flag of the Union flying always.

He enjoined the members of NUJIC to continue to adhere strictly to the rule and regulations of their professions.

In his remarks, the Chief Press secretary to the Governor of Oyo state, Mr Taiwo Adisa, enjoined journalists to shun fake news and make sure they put out a balanced story.