2023 Presidency: Competence And Integrity Should Be Considered, And Not Religion – Akeredolu 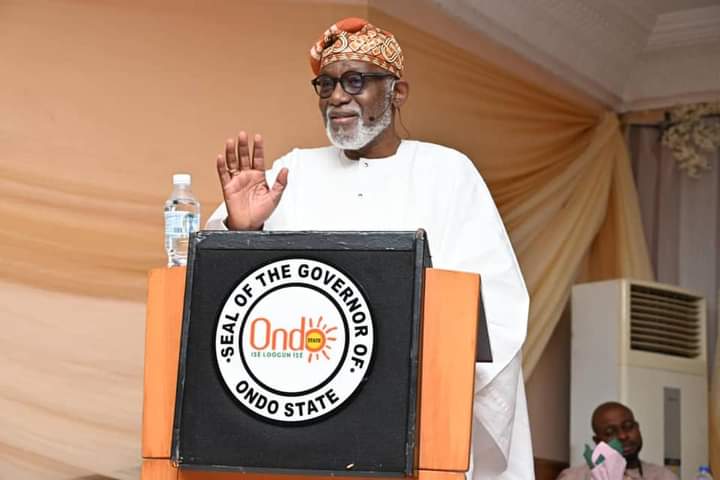 2023 Presidency: Competence And Integrity Should Be Considered, Not Religion – Akeredolu

Chairman of the Southern Governors’ Forum and Ondo State Governor, Arakunrin Oluwarotimi Akeredolu, SAN, CON, has said competence and integrity should be the criteria for representation, stressing that the recent debate on representation on account of faith is most unnecessary.

The Governor spoke on Friday at the 16th Jesus Festival Dinner of the Ibadan Anglican Diocese held at the Ibadan Civic Centre, Agodi, Ibadan. He was the Chairman of the occasion. Engineer Remi Osiberu,FNSE was the Special Guest of Honour.

He said: ”As Christians, we must not only be prayerful. It is important that we adopt proactive measures in our bid to protect ourselves against any evil design. We must be vigilant and ready to challenge all actions which threaten to relegate our collective interest to the background.

“In the same vein, we must be wary of the antics of the cunning and deceitful who may wish to exploit the challenges to advance their destructive designs.

“In as much as we encourage full participation of Christians in politics, our involvement must not be used to create disaffection among the various ethnic and religious groups in the country. We must resist the attempts by some elements to use religion to perpetuate crisis.

“Christians are yet to come together to elect representatives who must vie for political offices. Any individual aspiring to serve in any capacity should project his or her strength of character rather than hide under an omnibus but clearly dubious forum to appropriate our collective rights for personal consideration.

“The recent debate on representation on account of faith is most unnecessary. Competence and integrity should be the criteria for representation.

“All those who do not wish to be ruled by persons of dubious character should endeavour to be active in the days ahead. Let all those with their PVCs vote for candidates of their choice. All candidates should be put to the strictest proof of their claims.

“Anyone who exhibits any shred of doubt should be rejected roundly. The antecedents of prominent candidates in the forthcoming presidential elections, and even ALL elections, should be evidence of capacity. The manifesto belongs, largely, to the party.

“We must do more than criticism in the next elections or be ready to be ruled by those with no enviable pedigree. We must participate or be damned.

“We must tell all self-appointed spokespersons of the Christian faith to leave partisan politics for the practitioners and concentrate on the works for which they are called or appointed.”

Governor Akeredolu, who recalled that the political space was awash with embarrassing tales of assassination, thuggery and ballot snatching in the past, hailed President Muhammadu Buhari for setting the country free from the evils.

He said the President is determined to bequeath a legacy of electoral integrity to the country, adding that Election results are becoming more credible with reduced volume of election petition cases in the courts.

“Above all, the President has not allowed partisan interest to becloud his sense of fairness. He congratulates, almost always, whoever becomes victorious regardiess of the political parties to which the person belongs.

“On the whole, there is the pervasive feeling of improvement in the electoral process. The country can still do better than what is obtainable now. We are at a point where all of us must resolve to take more than a passing interest in what affects our general interest as citizens of the country.

“We must resist the temptation to stand aloof while others determine our collective destiny as a people. We must keep the debate on equity and justice alive for peace to reign in the land,” the Governor said.

Earlier in his Exhortation, the Bishop of Ibadan Diocese, Most Rev’d Dr. J.O Akinfenwa, congratulated Governor Akeredolu on his recent national honour of Commander of the Order of the Niger, CON, describing it as well deserved.

He noted the Governor’s numerous roles to make life better for the needy especially by promoting adequate security for their lives and property.

The cleric encouraged Nigerians to be vigilant and select credible leaders during the fast approaching election, urging more prayers for the nation.

At the event were some members of the state executive council and APC candidates.

Highlight of the event was presentation of award to the Governor and his family in recognition of his commitment to the security of lives and property of the people, his interventions on national issues and contributions to governance and Law profession.