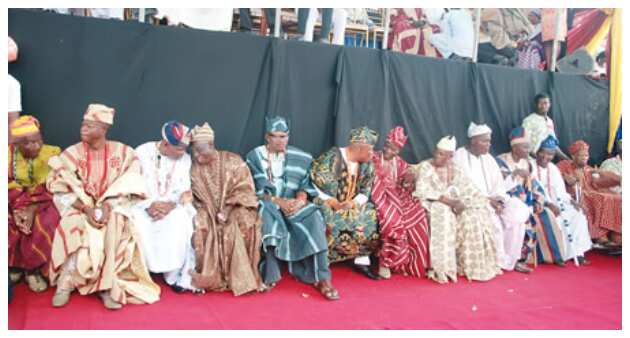 – The warning was given by the former attorney general of the state, Michael Lana

– Lana said that the former monarchs risk going to jail if they don’t stop passing off as royal personalities About 21 Obas in Ibadan, who have been sacked by the Oyo state high court, are at risk of going to jail for still parading themselves as monarchs.

This was revealed by the former attorney general of the state, Michael Lana, who pointed out that they were asked to vacate their offices following a suit filed by Rashidi Ladoja, Nigerian Tribune reports. Lana said that the state government illegally nominated the Obas to occupy the offices they were ousted from. The former attorney general of the state said that going by the chieftaincy laws of Ibadanland l, the Obas are not allowed to wear beaded crowns anymore.

Source: UGC He said: “The past administration purportedly, albeit illegally, translated some Ibadan High Chiefs into Obas and purportedly gave authority to wear beaded crowns.

“However, it is also a notorious fact that the said gazette, being the only instruments by which this aberration to Ibadan chieftaincy custom laws was carried out has, by the judgment of the Oyo state high court, made on 19th November 2019, been set aside.

” The former attorney general of the state said that going by the chieftaincy laws of Ibadanland l, the Obas are not allowed to wear beaded crowns anymore.

“That the rights to wear beaded crowns and coronets granted by the state government during the pendency of the suit are hereby revoked.” Meanwhile, Legit.ng reported that the Association of Local Government of Nigeria (ALGON) had accused the Oyo state governor, Seyi Makinde, of lacking respect for the rule of law.

The association said the governor has since assumption of office failed to demonstrate an iota of respect for the rule of law and courts’ declarations.

In an open letter signed by its chairman, Ayodeji Abass-Aleshinloye and its secretary, Jesutoye Oluyinka, alleged that the governor had serially breached the law which led to an illegal appointment of an unlawful contraption called caretaker chairmen.