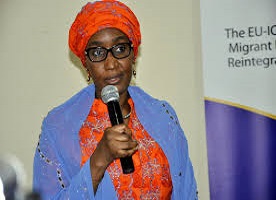 The Minister of Humanitarian Affairs, Disaster Management and Social Development, Sadiya Farouq, has assured that no section of the country would be marginalised in the disbursement of the Conditional Cash Transfer to the poor and vulnerable.

The President, had on Sunday during a live broadcast, directed that the conditional cash transfers for the next two months be paid immediately to beneficiaries.

Following the directive, the ministry commenced the disbursement of N5,000 in Kwali Central Area Council of FCT on Wednesday

In a live press briefing monitored on television by The Nation, the Minister gave an update of what the ministry has done since the directive was issued and how it intends to capture all the states of the federation.

Farouq said: “I want to appeal to citizens to desist from spreading fake and malicious news around. We just started the programme of the cash transfer and we have different states with their numbers all over the country. No section of this country is going to be marginalized.

“This is a national programme irrespective of religion or political affiliation. It is a programme that has been on and nobody is going to be shortchanged. Let us be nationalistic in this very trying moment of our lives. We are all committed to this work and I appeal that everyone should contribute his or her quota to get through this pandemic.”

“Currently, the beneficiaries that we give this cash transfer to are 2.6million people. In FCT, we have 5,982 households, in Nasarawa we have 8,271 households, Katsina has 6,723 households and, Anambra has 1,857 households.

“Household’s composition by the general standard is six-person per household. We are thinking of expanding the register and we are in touch with the UN Social Protection Donor group to see how the register can be largely expanded to cover additional 1million households but we have 11.4million households already for this intervention”.

“The way these people are captured is by community engagement. We go into the community and reach out to the opinion leaders there and they are the ones that decide which family falls within that category of poor and vulnerable households and that is what we use. So, there is real transparency and accountability in this regard.”