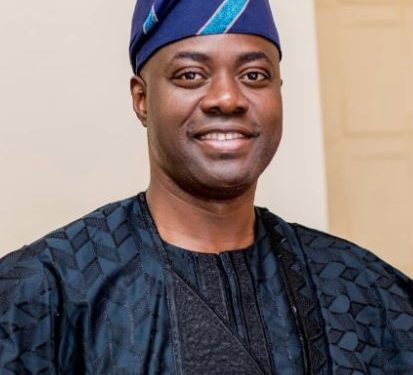 The governor declared at the launch that “the cleanliness of the state is a collective responsibility that must not be left in hands of government only.”

A statement by the Chief Press Secretary to the Governor, Taiwo Adisa, quoted the governor, as telling the gathering at the event put together by the Ministry of Environment and Natural Resources in conjunction with the Oyo State Waste Management Authority that the Clean and Green Initiative would empower many in the state.

He stated that the initiative would be replicated in all the nooks and crannies of the state in order to make Oyo one of the cleanest states in Nigeria.

Governor Makinde charged the relevant stakeholders to collaborate with his government in its bid to make the state more habitable, adding that the government will soon sponsor the Commissioner of Environment and some top government officials to Kigali, Rwanda, which is reputed as the cleanest city in Africa, to understudy its solid waste management architecture in order to replicate same in Oyo State.

He ssaid: “If you check the cleanest city in Africa, it is Kigali. I was there two months ago for the first time. Now, I have told Commissioner of Environment to write to them and they have responded to us that we should come to their city and find out how they achieved it. Soon, the Commissioner for Environment and his team will be there to do the findings. It is only the best that is good for Oyo State.”

Meanwhile, the contractor handling the construction of the 65-kilometers Moniya-Iseyin road, KOPEK Construction Company, has said that it would complete the project within the time frame given by the Oyo State governor, Seyi Makinde.

The road contract, which was revoked after being abandoned by the former contractor was re-awarded in November 2019 with a completion time frame of one year.

The Project Manager, KOPEK Construction Company, Paul Chamoun, while answering questions from journalists, on Friday, in Ibadan, said the company had resumed work immediately after the Yuletide; at resumption, the company, he said, filled all notable craters and potholes while constructing culverts and line drainages.

He said: “Immediately we resumed from the new year break, we started mobilization…The percentage of work to be covered will increase rapidly after all these preliminary works are concluded and we start asphaltic laying, we will not disappoint the people and the government.”

The Site Engineer who supervised the project on behalf of the State Ministry of works and Transport, Engr. Olaide Fadare, in his response, said the present administration re-awarded the road project after revoking the contract with the former contractor to ease the pain of the people plying the road and communities along the way.

He said the government realized the importance of the road as the link between Ibadan, the State capital and Oke-Ogun, which was noted to be ‘food basket’ of the State, adding that economic growth of the State through agriculture would be maximized when the road is completed.

“The road has been one of the most important roads that the present administration put keen interest on and that is why it was re-awarded immediately due to the fact that they noticed the professional inadequacies of the former contractor,” he said.

Previous Post FG WILL CONTINUE TO WORK WITH AGENCIES IN FIGHT AGAINST CORRUPTION, SAYS OSINBAJO
Next Post I regret not being allowed to marry the man of my choice – Patience Ozokwor