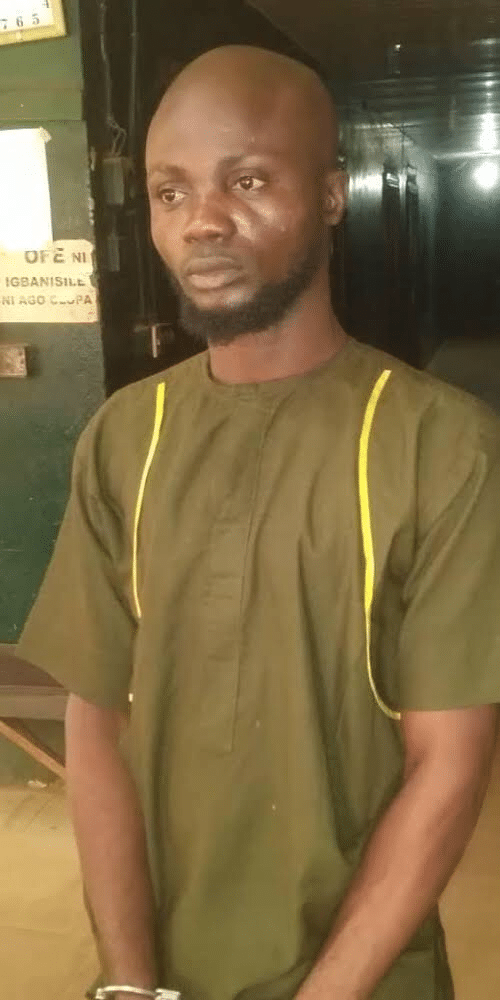 The Police in Ogun State have arrested one Mutiu Sonola for allegedly beating his wife, Zainab shotayo to death.

Nigerian Alert learnt that Mutiu, 37, started beating his wife in the morning on Christmas Day, over minor disagreement.

He was said to have persisted in hitting her despite being told by neighbours to desist from further assaulting his wife, until the 34-year-old woman slumped and slipped into coma.

He, allegedly, fled home quickly when it dawned on him that his wife was not likely to survive the beating.

It was learnt that neighbours notified the father of the woman, who rushed to the scene and took his daughter to the State Hospital, Ijaiye, Abeokuta, for treatment but doctors confirmed she was brought in dead.

The Police Public Relations Officer in Ogun State, Abimbola Oyeyemi, in a release stated that the suspect was arrested by detectives from Ibara Division of the Ogun state Police Command.

Oyeyemi stated further that investigation had revealed that Mutiu habitually beat his wife at any slightest provocation and that the latest assault leading to the woman’s death was triggered by a “minor disagreement.”

According to him, the remains of the woman had been deposited at the morgue of the State Hospital, Ijaiye for autopsy, while her husband would be transferred to the homicide section of the state criminal investigation and intelligence department for further investigation and prosecution.

“The suspect was arrested on Wednesday 25th of December 2019 following a report by the father of the deceased who complained at Ibara division that he was called on phone that his daughter was having a misunderstanding with her husband and that she has been beaten to comma by the husband.

“He said that he quickly rushed to the scene and took his daughter to the General hospital, Ijaye where the doctor confirmed her dead.

“As soon as the suspect realised that the victim is dead, he took to his heels and on the strength of the report, the Divisional Police Officer, Ibara division, Dada Olusegun mobilized his detectives and went after the suspect.

“His hiding place was eventually located and he was promptly arrested,” he said.