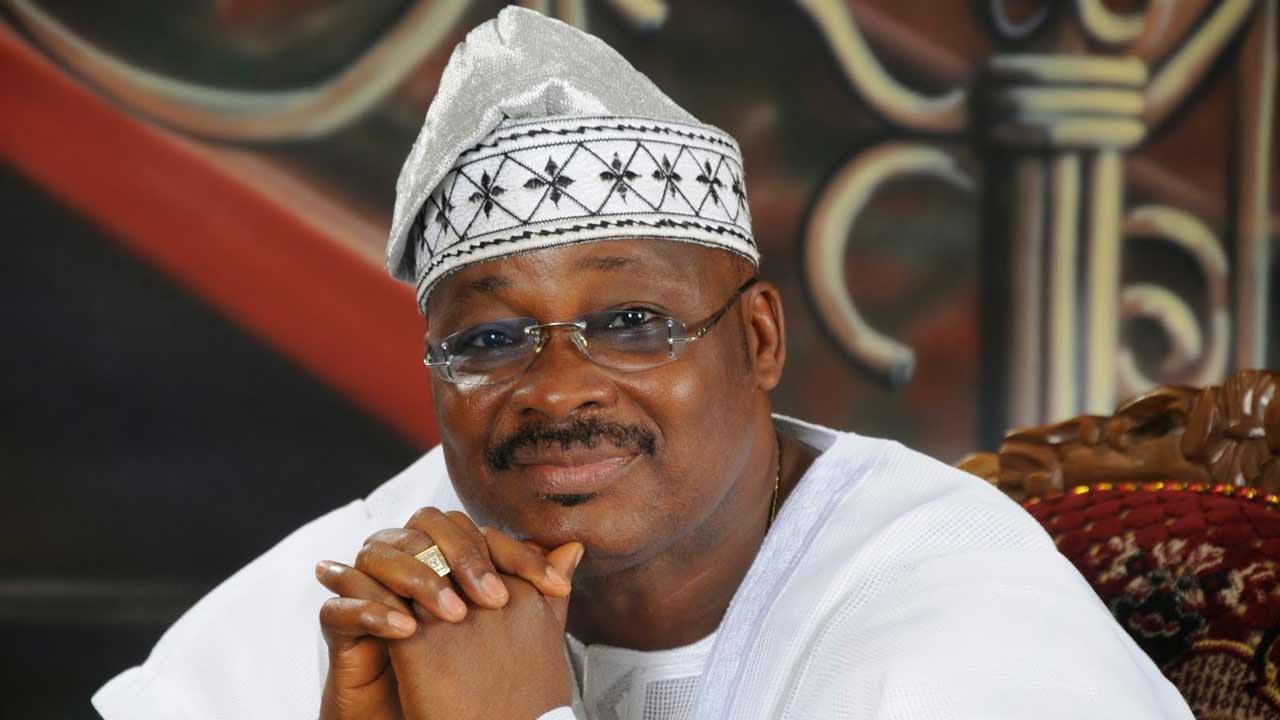 In the evening of October 17, last year, plain clothe security men invaded the Agodi GRA, Ibadan property of the immediate past governor of Oyo State, Senator Abiola Ajimobi, which was under construction and chased away workers. The former governor was said to have travelled outside the country, when the incident happened, making his aides to wonder who could have been responsible for the act.

Although a short video clip of the incident was released on the social media that evening, it was pulled down before dawn, while none of the former governor’s aides was ready to offer explanations on why the site, believed to be Ajimobi’s retirement house, was invaded.
Media aide to the former governor, Mr. Bolaji Tunji, also declined comment, but simply asked The Guardian to direct its questions to those who invaded the property. “Ask the persons that invaded why did they did so,” he said with a tone of finality and switched off his mobile phone.

The Commissioner and others have since been on bail, but are still reporting in Abuja for investigations surrounding their alleged involvement in the trespass.

Ajimobi also accused Makinde of boasting in different places and on several fora that he would revoke every property belonging to his predecessor anywhere in the state, if he does not discontinue the charges against the Commissioner.

The fourth defendant – the Attorney General was also accused of failing to advise the Governor, the Ministry and the Commissioner in the course of their revocation of the property.

The Media Assistant to Senator Ladoja, Mr. Lanre Latinwo, said his principal had been fighting for the recovery of the piece of land, which was revoked by former Governor Alao-Akala before the inauguration of the current administration.

He said: “There are issues between the past government and the current government. When Senator Ladoja was in government, there was a programme they did where they sold abandoned government property at GRA. He now put up a committee to look for such abandoned houses.

“There were some officials (political appointees) in government that were using more than five houses. They looked at it that this was too much for one person and reduced it to one. So, when they sold these quarters then, Ladoja bought that Quarter 316.

“When the EFCC case arose, they alleged that he bought the land with the proceeds of frauds and proceeds of government.

“Consequently, Adebayo Alao-Akala revoked the property. After 11 years, the court exonerated Ladoja that he did not steal any government money, or use shared proceeds to acquire that property. Ladoja now said he wants his land back.

“Immediately, Alao-Akala revoked the land, he gave it to Alhaji AbdulAzeez Arisekola-Alao. But I think Arisekola investigated it and discovered that the land belonged to Senator Ladoja and didn’t want to fight his brother. He now gave it to Ajimobi. The former governor started building a house on it and he annexed other adjoining plots. That’s why they are mentioning Chief Ladoja.

“When Ajimobi was in government, Chief Ladoja had said he would retrieve his land. Nobody wants to be cheated. Even before the Makinde-led government did what it did, Ladoja had taken the matter to court. The present Commissioner for Lands was the personal counsel to Ladoja on the matter.”

Giving insight into why government revoked the properties, a government source said: “The government had carried out thorough investigations on the lands in question and discovered that of the nine revoked plots of land, Senator Ajimobi personally owned four. One is owned by a company said to be linked to him, while other individuals are credited with ownership of the four others.

“Indeed, the plots credited to Ajimobi, as contained in the records at the State’s Land Registry indicate that besides the original plots of land acquired by the former governor, he was said to have strangely added two more plots, one housing the Protocol Offices of the State and another chalet that served the state Governors since the pre-independence days.

“Ajimobi was credited with Quarter 361, 361(B) and 361( C) (quarters B and C are the two other Government Quarters adjoining 361, with one of them housing Protocol officers of government); Quarters 371 and  372, while Plot 138 Magazine Road, Jericho, Ibadan was said to have been allocated to a company linked to him.

“Following Ajimobi’s acquisition of Quarter 361 and the adjoining quarters B and C, the land mass now stands at 23, 627sqm, equivalent to 48 plots.

“The Quarter used to house the Governors of the Old Western Region in the colonial days and the pre-independence era, as well as the immediate post-independence period, where the late Chief Obafemi Awolowo and Chief SLA Akintola ruled the Region.

“Quarter 361 was originally said to have been acquired by former Governor Rashidi Ladoja, when he served as Governor. His successor, Adebayo Alao-Akala revoked the land and reallocated same to the late Alhaji Abdulazeez Arisekola Alao, the late Ibadan businessman and Islamic leader.

“The late businessman in turn was said to have given out the land as gift to Senator Abiola Ajimobi, the immediate past Governor of Oyo State, through a “Deed of Gift” registered at the Land Registry. The veracity of the “Deed of Gift” is already being questioned and has become a subject of investigation.

“But Ladoja and Ajimobi were said to have ignited rivalry on the ownership of the land immediately Ladoja got discharged and acquitted from the trial over money laundering by the Economic and Financial Crimes Commission, last year.

“Quarter 361 is not supposed to be allocated to anyone, not only because of the historical value, but also for security reasons.

“Besides, the acquisition of Protocol Quarters adjoining Quarter 361 means that all Protocol officers in the employ of the state are rendered homeless.”

The source stated further that the acquisition of Quarter 361 and others by one man violates the one-man one-plot principle contained in the Land Use Decree of 1978.

Another source knowledgeable in land matters said an individual is not supposed to be allocated more than 5,000sqm. So, the 23,627sqm is way beyond an individual.

“The said Quarter 361 is way too strategic security-wise. Whatever happens in the State Secretariat, and the main Government House plus the administrative offices are at vantage view.

It was also alleged that one of the revoked plots of land is Block 1, Plot 1 and 2, old Mammy Market, Agodi, GRA, Ibadan, which is also close to the Governor’s Lodge.

“Block II, Plot2 of Agodi GRA, which was registered on February 13, 2019 with file number 57/57/3771, which belonged to Mr. Olalekan Alli, a former Secretary to the State Government was also revoked.

“Equally revoked is Block III, Plot Agodi GRA, belonging to Mr. Adelodun Ajimobi, believed to be the former Governor’s younger brother. The plot’s file number is marked 11/11/3806. It was registered on May 23, 2019 with Survey plan number IB. 3368.

“The plots given in the names of Chief Akande, Adelodun Ajimobi, Olalekan Alli and Otunba Moses Adeyemo were revoked for varying reasons, including violation of Land Use, violation of the principle of one-man one-plot and overriding public interests, the Government said last week.

“For instance, it was said that whereas the plots were given out as private residential slots by Ajimobi’s government, a number of the owners have converted the plots into commercial use and are currently developing them for commercial estates.

“The Land Use Decree of 1978 guarantees one-man one-plot. Chief Akande was allocated two plots at that location and besides, the development is supposed to be owner-occupier basis and it is not, that’s a violation of Land Use. The plots were being turned to commercial use though they were given out as private residential.

Ajimobi had, through his media aide, Bolaji Tunji, said: “The present administration has always shown either incompetence and intellectual laziness in verifying information. That is why they are always reversing all their policies.

“Instances of these are numerous and in the public domain. Governor Seyi Makinde has also not shown enough patience to gather facts, which is quite unfortunate. Obviously, a government of vendetta is administering Oyo State.

“The Magazine Road property belongs to the Railway Property Management Company Limited, and not the Oyo State Government (OYSG). Grandex is a tenant in the property.

“The land donated by Alh. Abdul-Azeez Arisekola-Alao is not allocations from the OYSG to Sen. Abiola Ajimobi. Rather, Arisekola bid for and purchased it, when the OYSG offered for sale, and he emerged the highest and preferred bidder for the two contiguous lands, which he later gave to Senator Abiola Ajimobi by way of two separate Deeds of Gift, duly registered at the Lands Registry and in respect of which all statutory payments on the Deeds were fully paid.

“The real reason why the lands were revoked are not unconnected to the criminal complaints reported by Sen. Abiola Ajimobi against the Commissioner for Lands, Abiodun Abdul-Raheem Esq., who invaded the property of Senator Abiola Ajimobi under construction with armed thugs, as well as the Governor’s frustration in respect of the Local Government case in court.

“All he needs to do is to toe the path of the rule of law, rather than chasing shadows and fighting imaginary and perceived enemies.”
The Ibadan High Court has fixed March 3 for hearing of the matter, which will expose how government landed properties are being shared by powers that be in society.