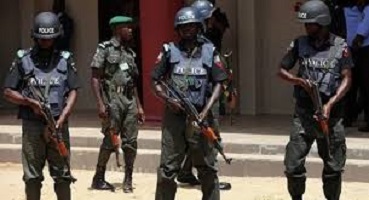 A detachment of armed Policemen has taken over the National Secretariat of the All Progressives Congress(APC) following the restraining of its national chairman, Comrade Adams Oshiomhole by an FCT Court.

The Police detachment, which came in two batches from the FCT Command and Wuse Divisional Police Station in 9 Hilux trucks, stormed the party secretariat at about 5 pm shortly after two court officers served the legal department of the party of the court order.

No sooner had the policemen arrived than they took over and positioned themselves in strategic positions in the Secretariat, directing all staff to go back to their offices while visitors to were advised to leave.

A another team of members of the Department of State Service (DSS) was also spotted at strategic positions of the Secretariat.

Sources within the party secretariat said that security beef up was to prevent some hoodlums from invading the secretariat following hints that some thugs were to invade the party office over the court order suspending the national chairman.

Addressing newsmen, the acting national Secretary of the party, Chief Victor Giadom confirmed the party had received the court order and will abide by the decision of the court.

On the unusual presence and take over of the party Secretariat, the acting national secrerary said, “here is nothing new about that. There has always been security at the National Secretariat of the party”.