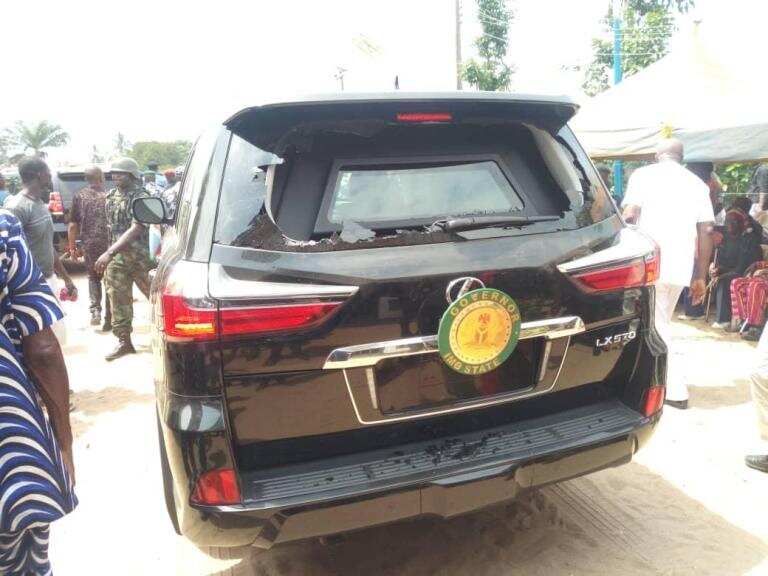 – If not for the timely intervention of security operatives, Governor Hope Uzodinma would have been physically attacked by a mob in Imo

– In fact, Uzodinma’s SUV jeep was on Sunday, March 8, partly damaged by a gang of angry youths in Ohaji Egbema area

– The youths threw stones and weapons at the governor, although none of the objects got to him The governor of Imo, Hope Uzodinma, on Sunday, March 8, narrowly escaped death when he was attacked by youths in the Ohaji Egbema area of the state. According to Vanguard, upon sighting the official SUV jeep of Uzodinma, some youths in the area started calling him a thief in loud screams, throwing stones at the vehicle.

Hope Uzodinma’s car damaged by angry youths in Imo state (Photo credit: Vanguard) Source: UGC The objects thrown at the car eventually damaged it, although the governor was unhurt, having been whisked away by security operatives.

This is coming just hours after Legit.ng reported that Emeka Ihedioha had given his final words in reaction to the Supreme Court’s refusal to review the last Imo gubernatorial election in 2019.

The former governor thanked Imo people and members the Peoples Democratic Party (PDP) in the state for their undying support throughout the legal struggle which he described as peaceful. In a statement made available to Legit.ng, the politician also expressed his deep gratitude and respect to all Nigerians from all walks of life who believe in due process and the rule of law.

However, Ihedioha alleged that his mandate was brazenly stolen from him and wondered where lies democracy “If institutions that are critical to the entrenchment of rule of law could thwart the wishes of the people in a cynical manner…” Ihedioha in the statement said: “Permit me to use this opportunity to thank all those who played one role or another in this historic quest for justice and truth.

I must thank members of the diplomatic community for voicing their concerns for the stability of our country. I commend the Chairman and Members of the Peoples Democratic Party (PDP) for their vanguard role and leadership during this period.