BREAKING; Plane with 177 passengers splits into 3 pieces; no casuality 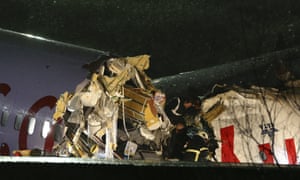 An aircraft, which was flying into Istanbul’s Sabiha Gokcen airport from Izmir skidded off the runway on Wednesday.
The plane split into three parts and the incident has been described as rough landing.
The crash occurred at the Istanbul Sabiha Gokcen International Airport in Turkey.
Turkish Transport Minister Cahit Turhan said that there were no casualties. However, some passengers were injured.
Turhan said the plane was carrying 171 passengers and six crew members from Turkey’s western province of Izmir.
In his reaction, Istanbul Governor Ali Yerlikaya said that emergency response teams had evacuated the victims to the hospital.