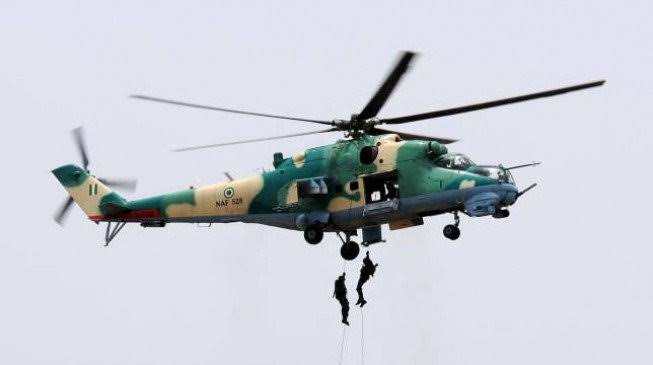 – The attack on the insurgents’ base carried out on new year eve, resulted in the death of many of the terrorists

– Air Commodore Ibikunle Daramola, NAF spokesperson, explains how the operation was carried out The year 2020 began on a sour note for the Boko Haram terrorist group in Borno state as many members of the terrorist organisation lost their lives on December 31, 2019 as a result of bombardments from the Nigerian Air Force (NAF).

NAF announced the success saying that apart from neutralising many of the insurgents, some structures in their camp at Abulam in the Sambisa Forest where they have their base. The announcement was made in a statement Air Commodore Ibikunle Daramola, the security body’s spokesperson.

The air force said the attack on the Boko Haram base was successful Source: UGC According to the statement, the strike was carried out by the Air Task Force of Operation Lafiya Dole. Coalition lauds troops over gallantry in Yobe, Borno on Christmas planned attacks Air Commodore Daramola noted that the mission was carried out to mark the commencement of Operation Rattle Snake 2, which is an Air Interdiction Operation that is targeted at taking out some identified insurgent camps and logistics facilities.

He said this operation is “in order to further unhinge the terrorists’ centre of gravity and diminish their fighting capability.” The statement explained that the affected base was selected for attack on the first day of the operation following credible intelligence reports that showed that the terrorists had resumed using the place which was earlier abandoned. On how the operation was carried out, he said the Air Task Force detailed its attack aircraft, supported by an Intelligence, Surveillance, and Reconnaissance aircraft.

The jets, he said, took turns to engage the target in successive passes and this led to the destruction of some of the structures as well as the killing of several terrorists.